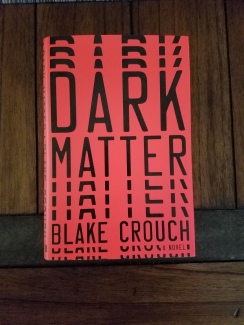 son Dessen left the bar in a bit of a huff. A small disagreement with a longtime friend has made him upset. He makes one stop at the store for some ice cream before going home, but the fateful stop ends much differently than Jason expected. He ends up being thrust into a world that seems his own but isn’t. His wife is not his wife, his son doesn’t exist, his co-workers and friends he does not know, and everything about his hometown is slightly off.  Where is he and how can he possibly make it back home? What if he’s trapped here forever? Questions that Jason struggles to find answers to. And answers he may never get.

Wow. That’s what I thought while reading Dark Matter by Blake Crouch. A sci-fi thriller that moves at a blinding speed and, while it does have some predictable moves, keeps the reader’s interest and doesn’t disappoint. Jason and his wife have made some sacrifices in favor of family life in terms of career goals. These sacrifices have made for a very happy family as well as a happy life. That life is ripped from Blake’s world in a unusual way. The reader figures out fairly quickly what has happened, but that doesn’t take away from the story.

Dark Matter has a terrific pace, some due to the writing (single line paragraphs that eat up space) and some due to wanting to find out what happens next. I found myself quickly attached to Jason, thanks to well developed characters by Blake. As for the predicable part, it’s not that it makes this a bad book in any way. It’s just a fact for most of the book. Until it takes an unexpected turn that most, well, at least me, readers didn’t see coming. Which piqued my interest even more and made me want to keep reading.

This book stayed with me for several days after reading it. I wasn’t even able to start up another book until two days later, and even then, I was still thinking about Dark Matter. I find myself wishing I could read it anew again. This seems like heavy praise but this is the effect this book had on me. This is the first book of Crouch’s I’ve read. I watched the t.v. show Wayward Pines, based off of his books, but I hadn’t read anything before this.

I highly recommend this book. It’s a fast, interesting read, has characters to care about, and has an outcome that was unexpected.

he year 2465 and Andrew Dahl has just joined the crew of the ship Intrepid as part of the xenobiology lab.  Dahl will have a

chance to serve on away missions with the ship’s captain and a few other high level officers. Only, things seem a bit odd.  Dahl’s lab mates seem evasive and conveniently disappear whenever the captain makes an appearance.  Dahl has also noticed that away missions tend to always involve a deadly alien encounter, the captain, along with a handsome lieutenant and three other high-ranking crew members, always survives, and a low-level crew member always dies on an away mission. Always.

What’s good: Red Shirts by John Scalzi is a humorous riff on old sci-fi shows and I really enjoyed the idea behind it.  Scalzi writes instantly likable characters who try to figure out what is going on with their ship while trying to avoid getting killed themselves. It’s a tad campy at times but I took it that it’s supposed to be that way. It’s a quick read and I did chuckle/laugh out loud a few times. After the end the are three codas told in first, second, and third person points of view. These three codas (the original name of the book is Redshirts: A Novel with Three Codas) focused on three later characters and were all exceptionally written and very heartfelt.  I almost teared up during one of them and I dare say I liked the codas even better than the main book.

What’s not so good: Well, not much really.  The only thing that I didn’t enjoy was an over reliance on the use of “….he/she said.” I found it a tad distracting that almost every time there was a line of dialogue from someone, the line would be identified with “…Dahl said; …the captain said…”, etc. I actually started to omit reading those qualifiers as the book went along. Other than that, I found the book to be very enjoyable.

I don’t want to give away too much of the book since the reason for the crew members always dying and the high-ranking officers always surviving is a goofy, fun reveal that sets the plot for the rest of the story.  Redshirts was a fun, fast read that had likable characters and a good ending. The three codas were standouts for me, though I certainly enjoyed the whole book.  If you are looking for a fun, sci-fi read, or just an enjoyable read, I highly recommend Redshirts. You shouldn’t be disappointed.